The extraordinary American brand that helped revolutionize the watch industry in the 19th century makes its return with an eye on the future.

Established in 1850, Waltham changed the way watches were made as the first company to industrialize the production process. To achieve this, it developed extremely precise machines to produce standardized movement components that were interchangeable. This ran counter to the established process used throughout the industry, where parts were made for an individual watch rather than a series of watches.

In 1854, the company built its first factory in Waltham, Massachusetts, and would eventually adopt the town’s name for its timepieces. The brand’s manufacturing technique profoundly influenced Swiss watchmaking, as well as other industries, says Waltham president Antonio DiBenedetto.

“Henry Ford visited the Waltham factory in 1910 and reportedly took some inspiration from the innovative assembly process the company used to make its watches. When you look back, it’s amazing to see the impact that Waltham had over the course of a century,” he says. Before it moved to Switzerland in 1954, Waltham was one of the world’s most prolific watch brands, producing 40 million watches during its first 100 years.


Modernizing watch production led to other milestones, including improved precision. Because of that reliability, Waltham pocket watches were used by railroad companies around the world and helped keep trains running on time in more than 50 countries. To achieve that level of chronometric reliability, the company took the unprecedented step of building its own astronomical observatory. Prior to the advent of the atomic clock, observatories were the best way to verify a watch movement’s accuracy.

During its time, Waltham timepieces were witness to several daring feats of exploration. The earliest came in 1909 when polar explorers Sir Ernest Shackleton (south) and Robert Peary (north) wore Waltham pocket watches to the opposite ends of the Earth. Despite harsh conditions, the Walthams performed well on both expeditions.

History may inform the new collection, but DiBenedetto is quick to point out that it doesn’t define it. “We’re obviously proud of the company’s heritage, but we don’t want to be known as a vintage brand,” he says. “I’m more interested in building on that past to create a modern Waltham legacy. For me, the new Aeronaval collection represents a continuation of the Waltham spirit.”

Historical Reference
To launch the brand in 2014, Waltham unveiled three models in its Aeronaval collection: Waltham XA, Waltham CDI and Waltham ETC. Each watch offers a contemporary interpretation of some of the brand’s most memorable timekeepers.

The Waltham XA is the prime example. It’s based on the XA-Type 37 Model, the aeronautical clock that flew aboard the Spirit of St. Louis in 1927 during the first transatlantic flight. Pilot Charles Lindbergh specifically requested this clock be added to the control panel of his custom monoplane.

Like its celebrated ancestor, the new Waltham XA includes a small seconds at the top of the dial. In addition to improving readability, the prominent location also helps the watch stand out among similar timepieces that feature the seconds display at the bottom of the dial. In terms of the watch’s technical aspects, its automatic-winding movement stores approximately 44 hours of power and is housed in a 47mm titanium case. Like all of Waltham’s new timepieces, the XA is water resistant to 300 meters. 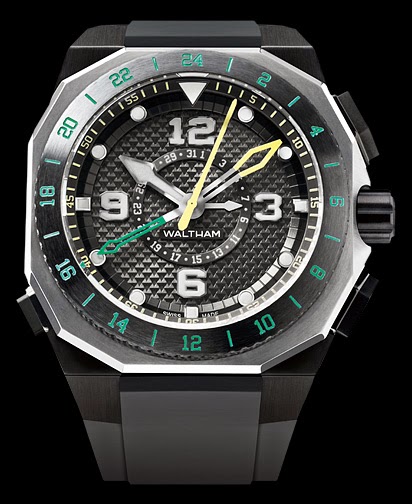 Flying Machines
Throughout its history, Waltham helped equip the American military, including in World War I when it produced the first wristwatches for U.S. forces called trench watches. During the Second World War, it manufactured a clock called the Civil Date Indicator Aeronaval (CDIA) that was installed in aircraft like the Hellcat fighter and B24 bomber.

The brand takes inspiration from that historic cockpit clock for the Waltham CDI, recreating its central date hand, which can be advanced by a pusher on the side of the 47mm titanium case. Pushers on the opposite side adjust the main hour hand—forward or backward—making it easy to correct the time when changing time zones. Meanwhile, a GMT hand keeps track of the traveler’s home time.

Speed Reader
The aeronautic influence can also be seen in the Waltham ETC. Its design cues come from the Waltham Type-A13a, a clock used in aircraft like the F4 Phantom, the jet originally used to train pilots in the TOPGUN program. Rapid readability is the central focus of the ETC, which stands for Elapsed Time Counter. 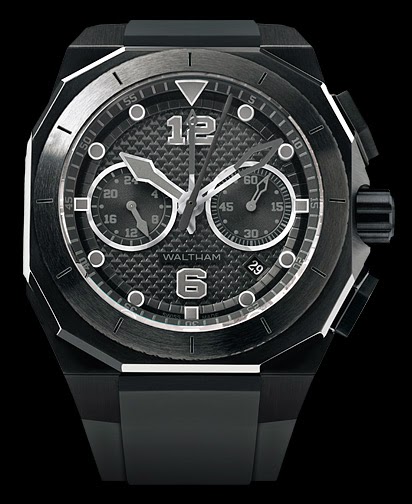 Unlike most chronographs that use separate registers to time events, this model features centrally fixed hands for the chronograph’s minutes and seconds. The two sub-dials are related to the time display and include a 24-hour day/night indicator on the left and a small seconds on the right.

Shared Identity
While each model in the Aeronaval collection is easily distinguished by its individual function, a clearly defined design code ensures all three project a united front aesthetically.

The cases are multi-faceted and play with light and shadow to create a dynamic look. Waltham underscores that contemporary style through its choice of materials: ceramic, grade-five titanium and vulcanized-rubber.

The brand offers three aesthetic variations for each model. Pure highlights the natural color of titanium. Eclipse features a bi-color design with the lower section coated in black-PVD. And Black Matter is a blackout version where the entire case is covered in PVD.

This new collection signals the rebirth of a legendary watch brand. DiBenedetto says, “Waltham wasn’t inspired by history, it helped make it: from the North Pole with Peary to Le Bourget airfield with Lindbergh. These timepieces recapture that spirit of innovation as they write the next chapter in Waltham’s extraordinary story.”

The full line is available at both of Cellini’s Manhattan boutiques.

Discover more of the history of the Waltham brand at waltham.ch
Posted by Cellini Jewelers